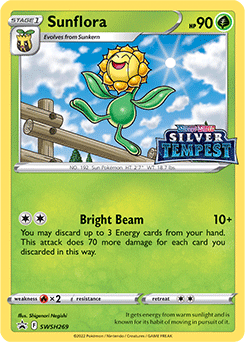 This smiling Sun Pokémon is ready to devastate your opponents with its powerful Bright Beam attack. When using this attack for 2 Colorless Energy, you may discard up to 3 Energy cards from your hand. This attack does 70 more damage for each card you discarded in this way. Thanks to its Energy cost and attack conditions, Sunflora can be slotted into any Prerelease deck—no matter the type. Discarding all of your Energy can be a bit of a gambit since you’ll need them to power up your other attackers, but if you time its attack well, Sunflora will have no problem shining in your battles. 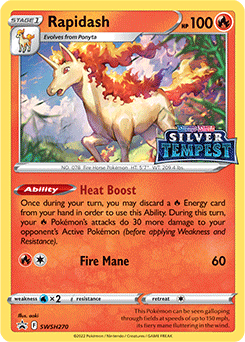 Turn up the heat in your Prerelease battles with the Fire Horse Pokémon! Rapidash can do a solid 60 damage for 2 Energy with its Fire Mane attack, but its Heat Boost Ability is the real hallmark of this Pokémon. Once during your turn, you may discard a Fire Energy card from your hand in order to use this Ability. During this turn, your Fire-type Pokémon’s attacks do 30 more damage to your opponent’s Active Pokémon. You can use Heat Boost to do more damage with Rapidash’s Fire Mane attack or bring the heat with another Fire-type Pokémon card in your deck. In the Sword & Shield—Silver Tempest Prerelease format, Ninetales is a fantastic partner as it can do up to 150 damage with Rapidash’s Heat Boost, raising the damage of its Scorching Breath attack. Like Sunflora, you’ll want to be careful about discarding too many Energy cards over the course of a game, especially with Prerelease decks only having 40 cards. 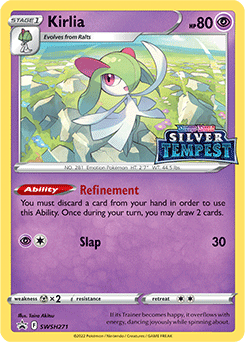 If consistency is key in the Pokémon TCG (and it is), Kirlia is certain to aid any player on their way to victory. Kirlia isn’t exactly a hard hitter, though, with its Slap attack only doing 30 damage. However, its Refinement Ability churns through the deck with ease in the Sword & Shield—Silver Tempest Prerelease format. By discarding a card from your hand each turn, you’ll be able to draw 2 cards and increase the odds of finding key pieces to a winning strategy. It can be difficult to find the cards you need with a low Supporter and Item count—which is common in Prerelease formats—but Kirlia might be all you need to refine your win condition. You may even be able to evolve it into Gardevoir, which has the same Refinement Ability and does 120 damage for 2 Energy with its Magical Shot attack, making the Evolution line a strong choice for both consistency and damage output. 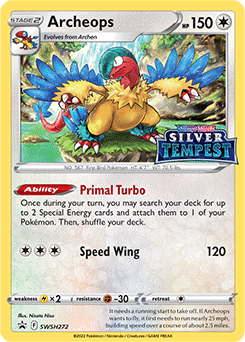 The First Bird Pokémon, Archeops, is one of the strongest cards in Sword & Shield—Silver Tempest and is able to swing Prerelease battles in your favor. Its Primal Turbo Ability allows you to search your deck for up to 2 Special Energy cards and attach them to 1 of your Pokémon. In the Sword & Shield—Silver Tempest Prerelease format, you’ll be able to accelerate Regenerative Energy and V Guard Energy to Pokémon with Colorless attack costs like Sunflora. Archeops’s own Speed Wing attack does a strong 120 damage for 3 Colorless Energy, and while it would usually be difficult to power up, attaching Energy from your hand and using Primal Turbo fulfills the Energy cost in a single turn.